Carl Hiaasen has a new book out titled BAD MONKEY. It looks great and in the style that I have come to love from Hiaasen. I first started reading him with his first book TOURIST SEASON. Then pretty much read every one of his novels for adults. I have not read the YA ones though.

Hiaasen always appealed to me because of the warped sense of humor and the fantastic characters. Plus his background writing for the Sun-Sentinel newspaper led him to stranger truth than fiction. Many of those real people and situations made it into his novels of the bizarre world of South Florida.

He is a native Floridian and has always been an outspoken critic of big business and their abuse of the land and culture. In 1998, he penned a short book for Ballantine’s Library of American Thought called TEAM RODENT: How Disney Devours the World. Needless to say the book was highly critical of Disney.

In 1998, I was Sales Director at Random House. One of my responsibilities was to attend dinners and lunches with key authors and key customers. We were publishing then-Disney CEO Michael Eisner’s autobiography WORK IN PROGRESS. Over a three-day period I had two lunches and one dinner with him and key buyers from B&N, Borders and Costco. The B&N and Borders lunches were in NYC and the Costco one was at the Disney HQ in California.

I was seated next to Eisner at one of the lunches. He asked me what I was reading. Random House had just published Jimmy Buffett’s A PIRATE LOOKS AT FIFTY (more on that in another blog post) and it was a #1 best-seller and a major smash.

I mentioned Buffett to Eisner. He wasn’t aware of Jimmy and his Parrot-head appeal. So I was reaching for an author to compare. I mentioned that Buffett represented the laid-back life-style and party feel of South Florida and the Caribbean. That he was similar to Carl Hiaasen.

Eisner straighten up and asked, “Isn’t Hiaasen the one who wrote that critical book about Disney?” Whoops?!? I got the sense that Eisner wasn’t use to hearing anything critical of him nor Disney. I said that it was but that Hiaasen’s “fiction is based in fact” – and his “fact is actually based in fiction.” It was a lame excuse.

Everything turned out ok. But I didn’t expect any offers from Disney… 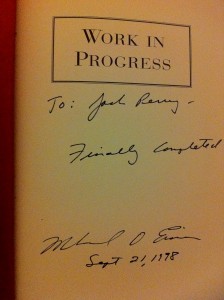