A few weeks ago, President Obama selected five books for his “vacation reading.”

What was the sales impact of the presidential picks? 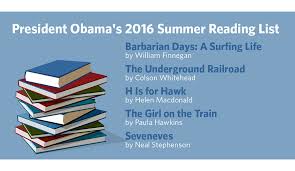 Five well received and award winning books. This list has been written about by most news outlets. What i want to do is explore a bit of the impact the President has on actual book sales with his picks.

First off, eliminate THE UNDERGROUND RAILROAD (Doubleday) because it was an Oprah Book Club pick. Although Oprah does not have the enormous impact she did when her book club was in full force, she can still move units. Her pick perhaps influenced Obama? But the sales increase is attributed to her influence not his.

Also take out THE GIRL ON THE TRAIN (Riverhead). This book has been a top best-seller for 18 months and now is a major motion picture. The publicity driven by a big movie always drives sales of the book. Being a #1 best-seller being made into a movie with A-list talent is a ticket to printing money. read it – loved it. Ready to see the Emily Blunt movie.

So that leaves us with the other three books. All three have been reviewed well. All three have a good sales record. All three are now in trade paperback (my favorite format for reading books). BARBARIAN DAYS (Penguin Press) won the Pulitzer; H IS FOR HAWK (Grove Press) is on every “best-of” list; and SEVENEVES (Morrow) is from the acclaimed Neal Stephenson. So all three have great pedigrees.

I appreciate that four of the five are in trade paperback. My favorite format.

Sales? The print sales on all three books went up 30-40% the week after the announcement and subsequently fell about 20% the following week after. So there was a significant bump but it was short lived. Time will tell if the weekly sales maintain at a pre-Obama level or settle back to their normal sales pattern. The numbers are from Neilsen Bookscan. Will be interesting to track the sales over time. I do not have access to the ebook sales, but my sense is there is a similar pattern.

The bottom line is there was an impact. Although the sales have declined from the previous week, they are still up considerably. These books may end up selling better over the long run because of this publicity.

But also, the President’s picks are all well-received and a sampling of some of the most talked about books of the season.

One last note. The first time and perhaps one of the most profound presidential picks was Reagan’s selection HUNT FOR RED OCTOBER from first-time author Tom Clancy and published by Naval Institute Press. Not only did the sales of the book go to #1, but Clancy became one of the best-selling authors for decades.