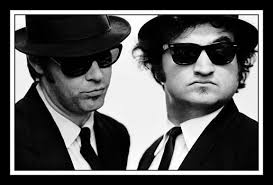 OK, I like all types of movies.  One of my favorites is THE BLUES BROTHERS.  I realize the plot is slim and the story just doesn’t always follow logic [like why were The Good Ole Boys so angry at them?  They arrived so late that they couldn’t have played at the bar anyway].

But, the movie makes me laugh.  Jake and Elwood are one of the best teams in all of movies.  It was never the same after Belushi died and there should have never been a BLUES BROTHERS 2000.  No Jake, no movie.  But what is done is done.

What also makes the movie so classic is it re-introduced me to so many amazing blues legends:

The music in the film adds to the greatness.  In addition to the legends listed above, the band that backed up Jake and Elwood are some of the best in the world.  Steve Cropper, Duck Dunn, Matt ‘Guitar’ Murphy, Tom’ ‘Bones’ Malone, etc…   So damn good.

Also — all the great cameos and actors throughout.

I will post more in the future, but wanted to get this strand started.