What is on your nightstand? A common question. I ask it all the time.

THE MARTIAN, Andy Weir — Love the backstory. How Weir went about gathering an audience while writing the book. He has written a modern classic. Plus it had a great movie adaptation. The combination is rare and creates a lore around it. Although many have suggested I read (including my son), I have not done so. I expect to read it now. The book will have so much more detail.

A PEOPLE’S HISTORY OF THE UNITED STATES, Howard Zinn — Wonderful writing. A view of America that is a different perspective than what was taught in my school growing up. All history is written from a point of view. Some are more direct than others. When I was an undergrad, I read INEVITABLE REVOLUTIONS by Walter LaFeber.  The book had an influence on how I looked at American history. A changing perspective. This book has a similar feel. Also, gets a good plug in GOOD WILL HUNTING. Probably the book that flows the easiest of the four.

GRAVITY’S RAINBOW, Thomas Pynchon — I just read the first page, “A screaming comes across the sky.”

INFINITE JEST, David Foster Wallace — Have always wanted to read. Have never felt the urge to start though. Watch the movie THE END OF THE TOUR with the Jason Segal’s Oscar-worthy performance. That inspired me to finally delve in. Still in the early stages, but enjoying the slow burn. I have two bookmarks – one for the narrative and one for the footnotes. 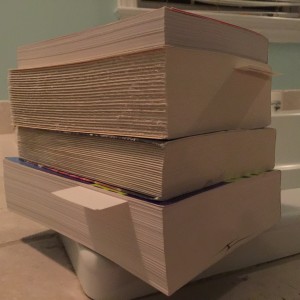 I am reading all of these in trade paperback. What a great delivery system for a book! Love the QP (as Borders would call it). Trade paperback is my favorite format to read books. I will still read some in hardcover and also ebooks. But, in the end, the ones I want to read and keep on my shelves, it is trade pb.

Now I just realized, that two of the four books are connected to Matt Damon. Which leads me to another must read book that Damon is connected. Patricia Highsmith’s THE TALENTED MR RIPLEY. The Amazon review starts out, “One of the great crime novels of the 20th century, Patricia Highsmith’s The Talented Mr. Ripley is a blend of the narrative subtlety of Henry James and the self-reflexive irony of Vladimir Nabokov.” High praise. Should probably read all five in the Ripley series in a row – The Ripliad. 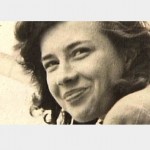 I started with “4 must reads.” Then I added one more. But that addition is the first one of five. So now I have nine books to read. They do multiply.

I intend to read all of them, I may not get through them. But I figure I will read as long as i remain engaged. I drop books all the time. There are just too many great books that I need to read — that I don’t have the desire to read ones that I don’t get something from.

Always the quest of reading.