What are some emerging trends at Amazon that are not children’s titles? Books with F*CK in the title. Type “fuck” into the Amazon search bar for books and over 50,000 hits come up and over 2,000 hits for titles from the last 30 days. This does not mean the word is in every title, but something in the metadata has tagged it as such.

Currently there are six in the top 85.

#27 – WHERE’S THE FUCKING TOILET PAPER? – John T – a self-published adult coloring book. Plays off the question of why TP was the item that Americans felt the need to hoard once the coronavirus forced us all to stay home. $4.99 paperback.

#63 – YOU ARE FUCKING AWESOME – Charla Bond – another self-published title. This one doesn’t put a “* in place of the U” and just spells it out. This is also a coloring book and has been in print since 2016 too. It is a “motivating swear word coloring book” – I love it!

#70 – ZEN AS F*CK – Monica Sweeny – this is part of the guided journal series ZEN AS F*CK from Castle Point Books (Macmillan). Great subtitle, “Practicing the Mindful Art of Not Giving a Sh*t.” $14.99 but being sold at $9.99 on Amazon. I bet journals are trending. Many of us are keeping “corona-accounts.”

#80 – THE SUBTLE ART OF NOT GIVING A F*CK – Mark Manson – one of the “classics” of the using the F-bomb in the title. This #1 NYT bestseller is a self-help title that has sold millions of copies. It isn’t a journal or coloring book. Maybe the publisher, HarperCollins, should create one?  Still in hardcover with paperback due in 2021.

#85 – FUCKING ADORABLE – CUTE CRITTERS WITH FOUL MOUTHS – Heather Land – another self-published title. This one is unique in that it combines the F-word with animals. This title is also from 2016 (when I guess this trend started) and is $4.99.

What was not in the top 85, but in the top 500, is the book that started it all back in 2001. GO THE F**K TO SLEEP, written by Adam Mansbach and illustrated by Ricardo Cortés – a classic and to add to its greatness, Samuel L. Jackson’s reading of the story.

In the late 1990’s, Jessie Sheidlower wrote the definitive book on the usage of the word fuck in language. The book is titled THE F-WORD and published originally by Random House Reference. It has been updated twice and the most recent version is published by Oxford University Press (yes, respectable) has a forward by Lewis Black (brilliant). I recommend this one. 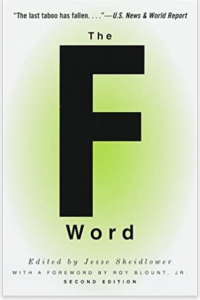