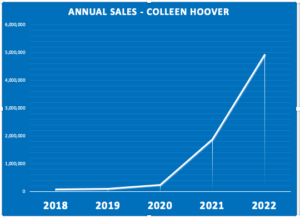 Colleen Hoover (CoHo) is the best-selling author in America this year. Prior to 2020, she was a best-seller, but after Tik-Tok “discovered” her, she has been on an enormous roll. Not only have her books risen to the top, she is capturing an elusive target market – teenage girls. This graph shows how much her sales have exploded over the past two years. There is a slight uptick in 2020, a more pronounced increase in 2021, and an explosion is 2022 (and this number only represents the first seven months of 2022).

Her books are mostly published by Atria, a division of Simon & Schuster. S&S just reported overall corporate sales YTD up 34%. I believe it is due to the 17 Hoover titles they publish. She also has a book with Hachette’s Grand Central Publishing. The book had been self-pubished and was smartly signed up by GCP in a two book deal. With a new title due next year in hardcover. She also has three titles published by Amazon’s imprint Montlake division.

Her astonishing success on TikTok has been heavily documented. From Buzzfeed and Glamour to the Washington Post. 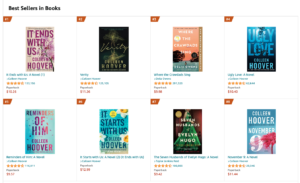 All of this has been widely reported. But it hit home when I witnessed the CoHo Impact in person.

I was on vacation and shopping at the local bookstore with my teen daughter. We were looking for, of course, Colleen Hoover titles. It was hard to find any. We finally stumbled across three titles (single copy of each) on a back table. Almost hidden. The store didn’t have the first three titles my daughter wanted, so she went with one that was in stock. When we were checking out, the bookseller mentioned that they can not keep the books in stock. She did mention that it has brought a new, much younger audience into the store. I agree, CoHo is creating a new world of readers.

Then, as if on cue, four teenage girls come waltzing into the store. They started wondering out loud where Hoover’s books were. They sounded as if this was (and perhaps so) the first bookstore trip with comments like “do they sort these by name – first or last?”; “is there a special section for her?”; “there looks like a lot of boring school (non-fiction) titles here, ugh!”. They couldn’t find what they wanted. They didn’t have the patience to look or the desire to ask if the store carried any copies. The girls then left. I heard one of the saying they had 2-3 different titles that they wanted to buy.

I do wonder why the store didn’t order up big, create an endcap or section for all her titles and punch up the merch? I am sure many stores are doing this – but why not all? This phenomenon has been ongoing and this store just has yet to embrace. CoHo is bringing an entire new audience to the book. This generation that we fight to get them off their phones and reading.

They want to read.

This is a huge opportunity.

The CoHo Impact will be felt for years…