Last week, a rumor was started when a mall executive off-handedly mentioned that Amazon might open 300-400 bricks and mortar stores. People started getting all excited and upset. Book executives pontificated about the value of bricks and mortar and how Amazon is realizing the need for a presence. The media went gaga — and this was all just based on a throw-away comment by an executive not even associated with the Seattle monster. The executive quickly recanted the comment and Amazon refused to comment.

Amazon has opened one bookstore in Seattle. They have ads up for employment in another location in southern California. Who knows what will happen next? But even a hint of what Amazon might do gathered a lot of angst and comments. 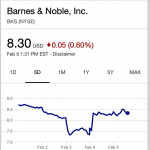 Barnes and Noble stock took an immediate 17% drop on the rumor that Amazon was entering their playground. Although the news was corrected, B&N’s stock has not recovered. To be fair, it has been in a tailspin all year, so the market analysts were already looking for a reason to sell. As of today, B&N stock is down 72% since July 17 (when it was $28.66 a share). It is now $8.30.

So what if the rumor is true? It doesn’t really matter.

What would happen? Why?

The bottom line is regardless of what Amazon does or does not do, even rumor has a profound impact on the bookselling and publishing industry.