ACID FOR THE CHILDREN – by Flea – his 10 essential reads

I just received Flea’s memoir. This is the first volume (a teaser for volume two in the book) before co-founding The Red Hot Chili Peppers. Looking forward to reading about his formative years and what shaped him into one of the best rock’s top bassists. At the back of the book, Flea lists 10 books that changed him. It is quite an eclectic list and I am sure informs his writing.

MAKE TWO HOLES IN EITHER END OF AN EGG

TO BLOW ALL THE INSIDES OUT OF IT 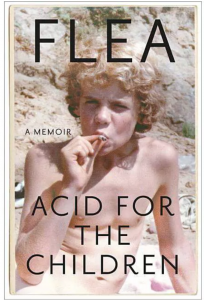 THE MASTER AND THE MARGARITA – Mikhail Bulgakov

AGAINST OUR WILL: MEN, WOMEN, AND RAPE – Susan Brownmiller

“There’s just too many damn books so I gotta stop but those ones really had an impact.”