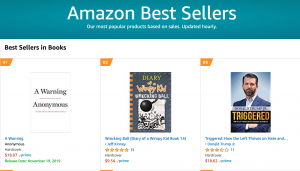 Amazon is a bellwether of what is happening in the nation. The country is enthralled with politics and everything Trump.

Above is a snapshot of the top selling Amazon titles.

Seems right. in between the two polar opposites, is the latest in a tremendous book series that unites us.

Then a few hours later, I was delivered this package from Amulet (division of Abrams). It was a promotional copy of the new WIMPY KID! Thank you. I love the shiny. silver packaging. It makes a statement. 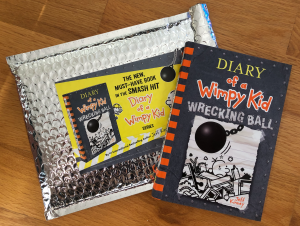 Also – both Anonymous’ book and Don Jr’s book are published by imprints at the same corporation, Hachette Books.