THE GREAT GATSBY is now in the Public Domain 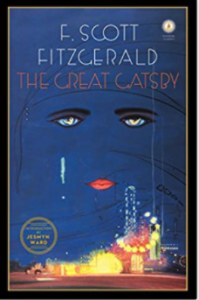 Every January, a list of books becomes public domain. Generally is a bunch of little known titles that have lost commercial value. But, occasionally a huge seller expires and is open for anyone to publish. In January 2021, a major work of American fiction, F. Scott Fitzgerald’s THE GREAT GATSBY became public domain. The book had been under copyright to Scribner, an imprint of Simon & Schuster. Over the decades, they have sold millions of copies. Now they will most likely to continue to sell thousands a week, but there are numerous other editions.

A quick count on Amazon, and I found over 75 editions (most of which have a pub date of January 2021). In addition to the basic text of the original novel; there are graphic novels, YA editions, illustrated editions, deluxe hardcovers, ebooks, mass market editions, trade paperback editions and gift editions. I wouldn’t doubt the total reaches 100 by mid year.

All of the “corporate five” publishers now have editions. Simon & Schuster has 5-6 editions; Penguin Random House has 7-10 (from deluxe hardcovers to mass market editions); Hachette; Macmillan; and HarperCollins also have editions. There are editions from numerous “unknown” publishers that crop up on Amazon. Given the low cost to create, print-on-demand, and Amazon’s access to millions of readers, a PD title like THE GREAT GATSBY is easy to pt up for sale. The key is how to cut through all the noise to get consumers to buy your edition. There are also hundreds of places to download a free copy of the book.

I am not going to drive through all of the options. If interested, John Williams in the New York Times wrote an excellent article of many of the editions.

How does a publisher separate from the others? The Scribner one has the classic cover and will continue to ride 75 years of being first.  The others from the corporate publishers will sell because of the strong branding of the lines (Penguin Classics, The Modern Library, Harper Perennial etc). Some will have a new introduction by a brand name author – Vintage has a John Grisham essay. Price is also a factor. But with so many free editions available, competing on price can be a losing proposition. Winning the Amazon SEO can also create interest, but it is a crowded market. And of course, the cover.

I looked at almost every cover. A lot of similarity in using an art deco typeface; a party set in the 20s; or Gatsby’s car.

There are the “classic look covers.” The iconic blue one still stands out. 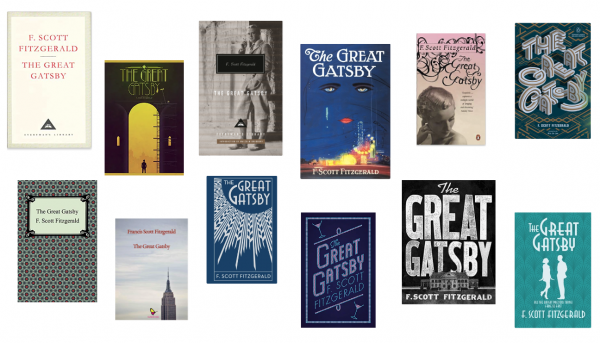 There are the “party book covers.”

There are the “car book covers.” 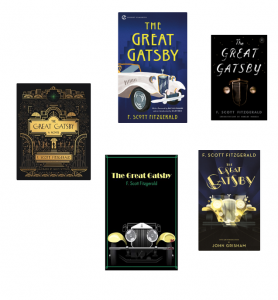