THE BEATLES – and the enormous amount of books published about them…

It was just announced that Paul McCartney has an enormous book publishing that covers all his songs and the meanings behind them. the book will come out in Fall 2021 and is titled THE LYRICS: 1956 to the Present. It is two-volumes, 960 pages and costs $100. This will be one of the biggest gift books of the year.

Type in “The Beatles” in Books on Amazon and over 10,000 hits come up. The Beatles are probably the band that has more written about them than any other. There are thousands of articles on books about and by the Beatles and those close (or not so close) to them. There are also thousands of self-published works. Rolling Stone magazine recently ran an article on the “10 Best Beatles Books.”  Bookseller Barnes and Noble has a post titled “10 Essential Books About the Beatles.”  Reader’s Digest has “9 Beatles Books You Need to Read.”  There were at least 20 new books on the Beatles published in 2020 including James Patterson’s about the murder of John Lennon.

Why so many books on the band? It goes much deeper than the music. In the case of the Beatles, art didn’t imitate life; but art created the reality. The Beatles led the changes in society during the 1960s. Their actions created much of the style and the sense of the era. The Beatles were so much of the decade, they started at the onset of the decade and were done by the end of it. Their music changed so that they later stuff is as good or better than the earlier music. But it is also different. A quick listening to the compilation album 1 and the growth and change are obvious.

The impact of each of them separately also is enormous. Each had a successful solo career and extended the legend.

In addition to the books by the band members (see photo above) The books can be put into numerous sub-categories, I want to focus on a few bigger ones.

My favorite — books about the stories behind the songs. I devoured A HARD DAY’S WRITE over a long weekend a few years ago. Love to hear the origin of these classic tunes and meaning. 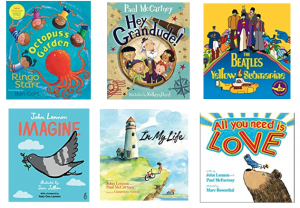 Another group is the “big books” that cover a tour or the recording sessions. The book GET BACK is coming this Fall too and is a tie in to a Peter Jackson doc on the classic album (aren’t all their albums classic though?

The next group are children;’s picture books by the Beatles. Some are just the songs assigned to an illustrator and others are originals – McCartney on being a “Grandude.”

And finally the group of the canon titles. Those that are written by experts and cover the history, the impact, the power of the band. Some of these came out last year. It is amazing how new material can continue to be found. Hw the Beatles will continue to be studied for centuries from now. 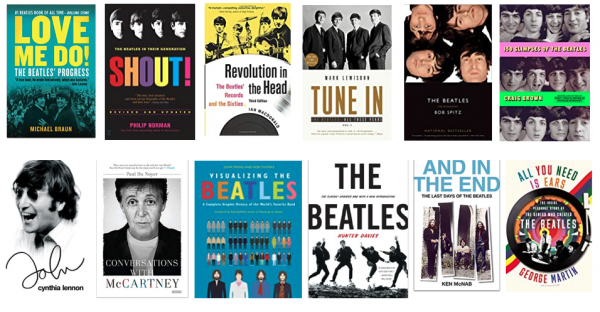