Open Road Media released 10 early novels of genius Michael Crichton earlier this summer. These books are in the collection THE MED SCHOOL YEARS and written between 1966-72 and under the name of John Lange. The retro covers and the series look great. I have just started reading them and look forward to the complete set. Coincidently, Hard Case Crime is bringing out trade paperback of these books (with different covers) this Fall. I may end up buying both the eBook and the physical.

I have been reading Crichton for years and especially liked his string of books from the 90s; JURASSIC PARK (1990); RISING SUN (1992); DISCLOSURE (1994); THE LOST WORLD (1995); AIRFRAME (1996) and TIMELINE (1999). He dominated the decade with his six best-sellers (in addition to re-issues in mass market of some of his earlier titles like CONGO and SPHERE). 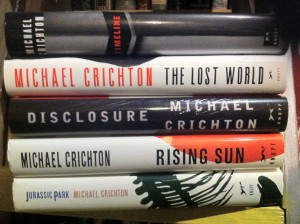 I read each of the books immediately. I would read them in 24 hours. He was so topical. I actually think he helped create the culture of the 90s. Each one of these books was made into a big movie. All well made with JURASSIC PARK being a movie/ride/experience that had a major impact on pop culture.

I was the National Accounts Sales Director for Knopf (part of Random House but pre-Bertelsmann).  We were having a good year and the numbers were strong. But this year Knopf was “dropping in” Michael Crichton’s latest AIRFRAME in early December. 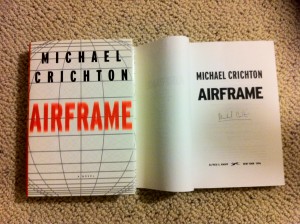 Just in time for Holiday giving we were getting an “un-budgeted” 2-million copy gift that would propel us far beyond the annual goals.

This was great! We already had made budget, but the billing for mega-author Crichton would push the bonus to the max.  Every rep in Sales made more money because of this single book.

I mentioned this to Mr. Crichton when we had a “meet and greet” in the conference room. I thanked him. I went on how his book was going to make the entire Sales Force have better bonuses. He looked at me and said, “Do you think it will sell?”

I was confident in my answer; I knew it would blow out like his last few. I replied, “of course, you are on a roll!” He was the biggest selling author in America and he was one of the smartest people ever to pen novels. He had even won an Edgar for A CASE IN NEED written at Harvard Medical School!  Which brings us back to the reissues from Open Road. Can’t wait to read them.

By the way, AIRFRAME went on to be a #1 smash and sell millions of copies.