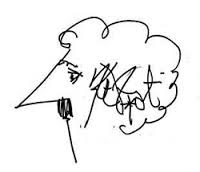 The first time was at a book party for Andrew Dubus and his new collection of short stories, DANCING AFTER HOURS. I was the national accounts director of sales for Knopf (division of Random House) and back then there were a lot of book parties. I remember walking through the party and just “bumping into” Mr.Vonnegut. We exchanged a few words and that was it. I was thrilled. He probably didn’t even remember.

The second time I met him was 4-5 years later. The Random House offices were at 201 East 50th in NYC. I was walking from Grand Central Terminal and saw Vonnegut sitting on a bench along Lexington Ave. I did a double-take. I walked past him and thought he looked familiar. Kurt Vonnegut was very distinctive looking.  I turned back and stopped. Had about a five minute conversation with him. I don’t remember the details. I walked away feeling very cool for I had a chance to talk to a genius.

Although I am a fan of his work and was thrilled to meet him, I have not read every novel. I probably have read only 6-7 of his books.

My favorite is SLAUGHTERHOUSE FIVE. I love time travel novels and found the story of Billy Pilgrim thought provoking. I also enjoyed the movie. Many people were required to read it in school. I never had to read. I read it because I had seen the movie first and wanted to understand it better.  I almost always read the book before the movie but in this case I didn’t because both came out decades earlier.  Charlie Kaufman is rumored to be writing a new script for a new movie. I can’t wait.

My other favorites are BREAKFAST OF CHAMPIONS and the short story collection WELCOME TO THE MONKEY HOUSE. Both had the bizarre worlds and style that appealed to me. What I learned was that you could do whatever you want. The rules or writing, drawing, reading and creating are flexible. I took from Vonnegut that one could just be as one wanted to be. Go for it.

There is an interesting business story behind Vonnegut’s eBooks. Because a deal was struck a decade ago (years before Kindle existed), Rosetta Books acquired the digital rights. But Random House Inc. also has the rights. So, Amazon has two eBook editions of many of his titles. The Rosetta Books versions come up higher in search and are available on the Kindle Owners Lending Library (KOLL) for free. The books are also available in hardcover, trade paperback and mass market.

His work is also available for people to write fan fiction through Amazon’s Kindle World program. This was received by many as wrong, just wrong. But it remains. I do not think it takes away from his greatness. I believe it probably makes Vonnegut even more of an icon.

Kurt Vonnegut – an American master and an original.

I have one of his books signed — what an original signature too.