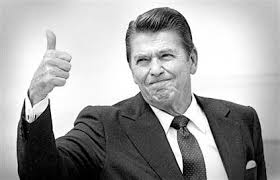 My father always told me to never bring up politics and religion in conversation unless you wanted an argument. So I take a risk by discussing Ronald Reagan in this post.

I will start off by saying I have both Republican and Democrat friends. I believe the discussions in America are healthy and am glad people have the right to speak their mind. I am not happy with the anger and lies. I don’t like when the debate gets away from the facts and wild statements come out. That is not helpful and actually insulting to most people.

Ronald Wilson Reagan would have been 100 a few days ago. This brought on books, speeches and neo-cons continuing to build the “Myth of Reagan.” I am not saying this is bad. Americans need heroes. America needs to look back at figures and make them larger than life. To do this, they also need to ignore and alter the truth.

This has been done with all out heroes.  JFK’s disappointments outweigh his accomplishments, but the image prevails. Washington, Adams and all the founding fathers did great things but they also were just men and had their faults. Lindbergh had a secret family, Jefferson had children with his slave, Babe Ruth drank like a fish, etc.

My point is not to tear down these men. But to acknowledge that they were just men and had their flaws.

Reagan is looked at by Conservatives today as a great man. They want to name airports and roads after him and put him on a pedestal. People forget that he raised taxes 11 times during his presidency. He ran up record federal spending and debt. He sold weapons to our enemies (Iran) and financed an illegal war in Nicaragua. How can we forget his testimony in front of Congess where he said over and over, “I don’t remember.” I believe he was telling the truth, he didn’t remember.  All signs show that he had Alzheimer’s for most of the second term and possibly the first.

But he was THE GREAT COMMUNICATOR. He was an optimist. He made Americans feel good. He was a symbol of hope. So the policies don’t matter. The actions are not important. What is important is he made us feel positive.

Life is difficult. Times are hard. Leaders reassure us that things will be better. Leaders communicate that sense.

In that definition – Ronald Reagan was a great president. His myth will continue to grow. His negatives in office will be forgotten and the stories will continue to be embellished and white-washed. Is that bad? I don’t know. Today is what it is — there is no way to change it. No reason to harp on it.

As many have said the greatest role Reagan ever played was President. He looked the part. He was brilliant in it. He read his lines perfectly. He pulled it off.

People need heroes and heroes need to be created.

The Reagan Hero Myth is being created and that is just what it is.